skip to main | skip to sidebar

I want to hear from YOU!

I'd love to hear from you to know if I am supplying enough info for you!

Is there something else that you'd like to see me add to this LONA-KIDS page?

Just drop me a line when you can.
I know finding a free moment isn't easy when the little ones are around! :)

RING IN THE HOLIDAYS at city recreation

Lots of fun events are being hosted by the City of Rochester! Enjoy!
Posted by Pam :) at 11:48 AM No comments:

This is going to be fun! Make sure kids are accompanied by a parent or guardian!
Posted by Pam :) at 11:46 AM No comments:

Gifts That Will Make Your Kid Rich - from Money Magazine (online)

Gifts that will make your kids rich
Ways to present fiscal lessons without looking like the Grinch.

(Money Magazine) -- Tired of battling hordes of shoppers for Tickle Me Elmo, the latest Xbox 360 game and other hot holiday items that feed your children's rampant consumerism?

Eager for a present that gives your kids a financial jump on life and is still, well, fun? See what gifts can help your children learn how to save and spend wisely, with payoffs that last well beyond the season.

Best book for teaching little kids the value of a buck
Alexander, Who Used to Be Rich Last Sunday 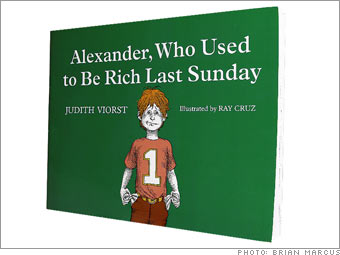 Who it's for: Four- to eight-year-olds

What it's about: In this charming story by Judith Viorst, Alexander gets a gift of $1 from his grandparents. He has lofty plans to save the money for a big-ticket itembut instead blows it all in the face of life's temptations and regrets it.

Why it works: By age four, kids are old enough to grasp the basic concepts of saving and spending, but they're not likely to sit still for a lecture on the topic.

"When children are engaged by a story and see a character's life turn this way and that, they'll learn by example," says Margaret McKeown, a senior scientist at the Learning Research and Development Center at the University of Pittsburgh.
Best board game for learning money-management skills
Payday 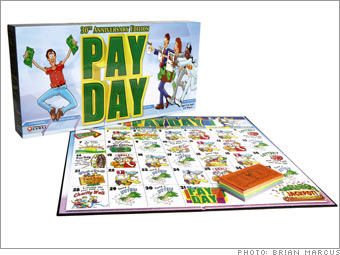 Who it's for: Preteens

What it's about: Created in 1975, this game sends each player down a 31-day path to earn and spend money - working, investing, shopping, paying bills, even gambling occasionally. The player with the most cash left at the end wins.

Why it works: Recent research has shown that, developmentally, kids are most receptive to learning financial concepts before they hit high school. But that doesn't mean they're interested. When they're having fun playing a board game, though, they won't even know they're getting a tutorial on budgeting, borrowing with interest, saving - and the perils of squandering their money.
Best gift from Grandma
Contribution to a 529 Plan
Price: Typically $25 to $250 for the initial investment

What it's about: Move over, savings bonds: 529 accounts have the edge for grandparents eager to help pay Junior's college tuition. Advantages include tax-deferred growth on earnings, tax-free withdrawals and, in many states, a deduction for contributions. Compare plan details at savingforcollege.com.

Why it works: While kids may not get excited about this gift now, just wait a few years. When they owe thousands less in student loans than their college buddies do, you're sure to get plenty of appreciation.
Best way to make your kid a millionaire
A Roth IRA
Price: As low as $100 to open

Who it's for: Any child who has earned income

What it's about: You can invest as much as your child makes, up to $4,000 a year. Tax-free compounding over time produces a powerful payoff: A $1,500 yearly contribution will be worth nearly a million bucks in 50 years, assuming an 8 percent average annual return.

Why it works: Few teens are likely to be excited about saving their hard-earned babysitting money for retirement. So offer to match what they make in an IRA. Want another way to ramp up their enthusiasm? Slip a little cash into the gift card too.
Posted by Pam :) at 11:00 PM No comments: 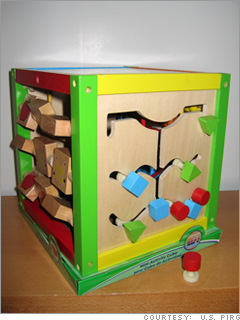 Lincoln Logs Frontier Firehouse, Frontier Sheriff's Office
U.S. PIRG danger group: Near small parts
Manufacturer: Hasbro
Problem: This toy, which is targeted at children ages 3 years and older, does not violate federal safety regulations, but the smallest log could block a child's airway given its size. 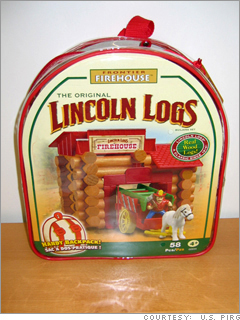 Magnetix (assorted)
U.S. PIRG danger group: Magnetic toys
Manufacturer: MEGA brands
Problem: Even though the manufacturer issued a replacement program for this product in March, PIRG says that older versions of the toy may exist on store shelves or in consumers' homes. When swallowed, magnetic toys can cause severe internal damage, warns PIRG. 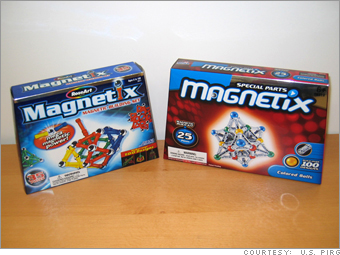 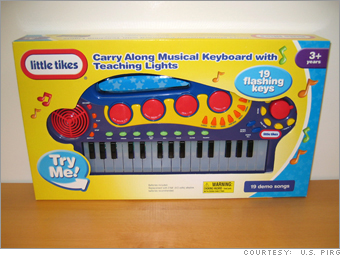 Water Yo-Yo Ball
U.S. PIRG danger group: Strangulation
Manufacturer: Assorted
Problem: U.S. PIRG warns that the cord can wrap around a child's neck and poses a risk of strangulation when swung over the head. 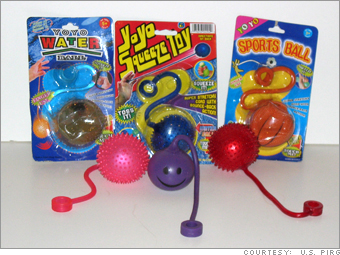 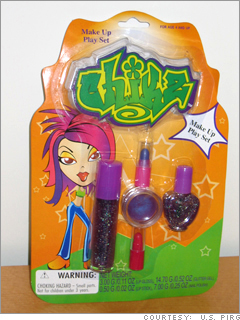 NEW YORK (CNNMoney.com) -- While shoppers will be eagerly snapping up toys for their children this holiday season, one consumer advocacy group is urging vigilance before parents spend asingle dollar.

Issuing its 21st annual "Trouble in Toyland" report Tuesday, the Washington-based U.S. Public Interest Research Group (PIRG) warned that there are many toys out there that pose significant safety hazards to children.

"While we can report substantial progress after more than two decades of advocacy on behalf of America's littlest consumers, U.S. PIRG's researchers still found trouble in toyland," U.S. PIRG Research Director Alison Cassady, the author of the report, said.

Nearly 73,000 children under the age of five visited the emergency room for toy related injuries in 2005, according to the Consumer Product Safety Commission (CPSC), and 20 children died from toy-related injuries last year.

Choking on small parts, balls or balloons remains the biggest threat posed to children, according to PIRG, particularly from such toys as Wal-Mart's (Charts) Kid Connection Mini Activity Cube.

Hasbro's (Charts) Lincoln Logs Frontier Firehouse was another toy singled out by PIRG that could pose a choking hazard, while Little Tikes' Carry Along Musical Keyboard with Teaching Lights was considered a dangerously loud toy for children by PIRG.

PIRG also warned of a number of toys that contain magnets, which could cause internal harm if swallowed by a child.

"Swallowing a magnet is not like swallowing a penny," said Cassady. "Powerful magnets can wreak havoc inside the body."

The consumer watchdog also said it discovered a number of toys, including cosmetics and jewelry, that contain harmful chemicals, including high concentrations of lead that can cause lead poisoning.

The Toy Industry Association, which represents North American toymakers and distributors, issued a statement in response, claiming that reports produced by groups such as PIRG needlessly frighten parents.

"Toys are an easy target, and we are very concerned by reports that ignore or misinterpret the facts," said the industry group. "Very few of the toys named ever turn out to actually pose a safety concern when played with as designed."

"Consumers should know that toys sold in the United States are the most highly regulated and monitored in the world."

Calls to a number of manufacturers including Hasbro and Little Tikes, whose toys were cited in the report, were not immediately returned.

While most toys were produced by private firms or imported into the U.S. from foreign countries, a number of the toys cited by PIRG were produced by large U.S. companies, including Mattel (Charts).

According to the U.S. Consumer Product Safety Commission (CPSC), almost 73,000 children under the age of 5 were treated in emergency rooms for toy-related injuries in 2005, the most recent year for which numbers are available. Twenty of those children died.

"Even one toy-related death is too many, because these deaths are preventable," said U.S. PIRG Research Director Alison Cassady in a prepared statement.

Children continue to choke on toys that meet the letter of the law. In September, Playskool recalled the Team Talkin' Tool Bench after two children suffocated when the toy's oversized plastic nails became lodged in their throats. U.S. PIRG found several toys on store shelves that have parts shaped like corks or these toy nails that could pose similar suffocation hazards.

Toymakers have started using powerful magnets in building toys and magnetic jewelry. If a child swallows more than one magnet, the magnets can attract each other inside the body and cause a bowel obstruction or life-threatening tear in the intestines.

A little boy died last Thanksgiving and many others have had life-saving surgery after swallowing magnets from MEGA Brands' Magnetix toys. MEGA Brands has modified the design of Magnetix and placed a label on the toy's packaging warning parents about the dangers of magnets.

U.S. PIRG has called on CPSC to require a warning label on all magnetic toys that tells parents to seek immediate medical attention if a child swallows magnets.

Children exposed to lead can suffer delayed mental and physical development or even death. In February, a 4-year-old died of lead poisoning after he swallowed a bracelet charm that contained 99 percent lead. U.S. PIRG researchers went to just a few stores and easily found four items of children's jewelry that contain high levels of lead, ranging from 1.8 percent lead to 34 percent lead by weight.

Cords and elastics attached to toys can hurt children by wrapping around their neck or other body part and causing strangulation or cutting off blood flow.

One toy in particular that's caused problems in recent years is the water yo-yo: a liquid-filled ball at the end of a stretchy cord. Last month, a 5-year-old Bellevue, Washington boy almost suffocated when the toy's cord wrapped tightly around his neck several times. CPSC has recorded about 400 injuries to the eyes, face and neck since the water yo-yo ball came on the market three years ago.

"CPSC should not wait until a child dies to protect children from the dangers posed by playing with this toy," said Cassady. Her group is asking the CPSC to ban the water yo-yo immediately.

Cassady reminded parents that the toy list in the U.S. PIRG report is only a sampling of the potential hazards on store shelves.

"Shoppers should examine all toys carefully for hidden dangers before they make a purchase this holiday season," she said.

What you can do

• Find out what toys are ideal for your child's age.

• Check our handy recall finder to see what toys have been recalled by the CPSC.